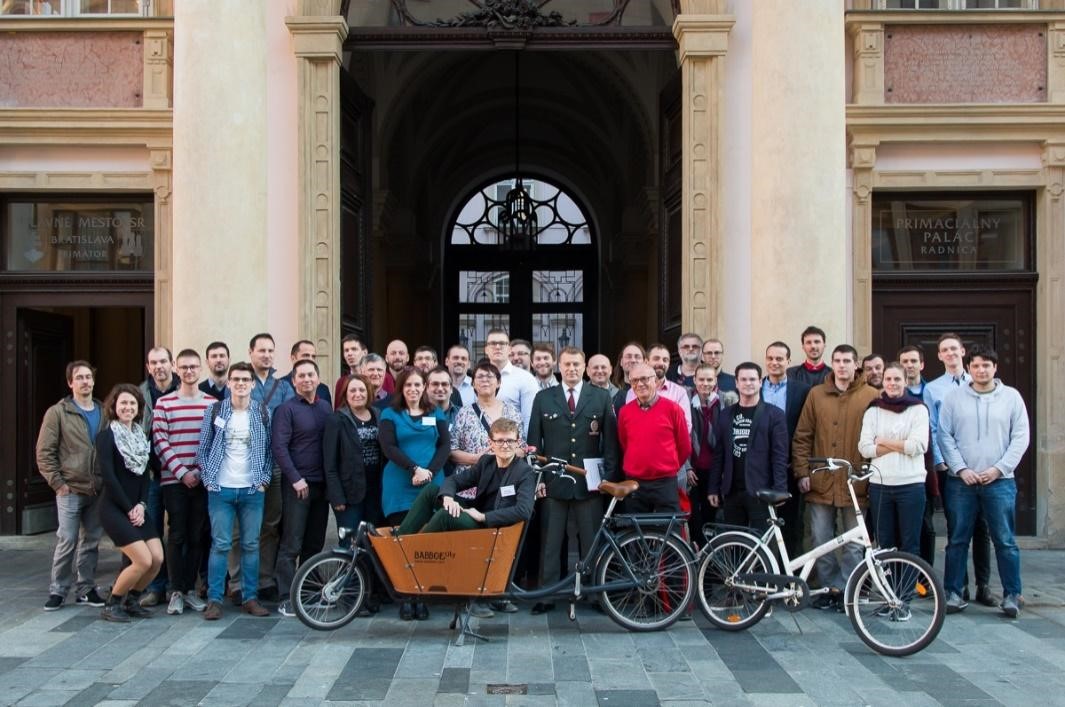 Bratislava, February 19, 2019 – The premises of the Justi Hall of the Primate’s Palace in Bratislava welcomed several European experts on cycling. The international training workshop took place within the framework of an international project called Cyclurban: Cycling as an Element of Urban Climate Mitigation Policy, which is funded by the European Climate Initiative (EUKI).

Civic association and Cyclurban project partner Cyclokoalicia a workshop focused on the development of cycling as a mode of transport in Slovakia. Except for the co-organiser, the non-profit company ideas into energy, numerous representatives of cities and municipalities, policemen from the Presidium of the Police Force, as well as representatives of the Ministry of Transport and Construction of the Slovak Republic (MDV SR), including the National Cycling Coordinator Peter Klučka, attended the event. The workshop was also not lacking a representative of the Ekopolis Foundation as well as the activists and civic associations interested in more cycling routes in their regions.

At the beginning of the workshop, Boris Valach from the company ideas into energy presented a strategic analysis of the cycling’s status quo in Slovakia. The findings from the BYPAD (Bicycle Policy Audit) on the current state of cycling in Bratislava were presented by Lenka Rozsívalová from the Cycling Coalition. The conclusion of the first block was designated to the national policy recommendations on how to improve cycling in Slovakia, which subsequently discussed with the workshop’s participants.

European experts on cycling from Poland and the Czech Republic gave their speech at the workshop, too. Tamás Dombi, Deputy Director at the Warsaw’s Public Roads Authority, provided examples on how Warsaw succeeded in building or completely renovating up to 200 km of cycle routes in the period of four years. He shared also the city’s experience with an urban bike-sharing system, which offers also bicycles intended for children.

“We are glad that we have managed to bring people like Tamás Dombi to Slovakia, who is directly responsible for the development of cycling in the Polish capital, Warsaw. It is precisely Tamás who initiated the process of cycle routes’ construction there. He gained his knowledge at the course led by Copenhagenize (Denmark), which is a company that consults and implements measures for the further development of cycling transport in cities around the world, in accordance with the Copenhagen model,” said Lenka Rozsívalová, the project coordinator. “I am very glad that we managed to move one step further, as the invitation to the workshop was also accepted by the representatives of the Presidium of Police Force. At the same time, I believe that this event will not only be the completion of the Cyclurban project [in Slovakia], but we will also build on it in case of other follow-up projects about which we already have unequivocal ideas,” added Boris Valach, the representative of ideas into energy.

Another foreign expert, Michal Šindelář from the Czech Environmental Partnership Foundation, focused on PR as part of the overall strategy for the development of sustainable transport. In Brno, he has prepared and realised a public awareness campaign under the title I Ride for Brno (Jezdím pro Brno). He also organised the so-called “Nakoleon” cycling trips, attended by more than 1,000 people.

A vital contribution to transport infrastructure tools was provided by Peter Netri, who is responsible for sustainable transport development in Bratislava. His presentation drew attention to easily realisable infrastructure interventions, implementation of which would bring Bratislava and Slovakia to a new level of modern mobility.

One of the event´s objectives was to support the exchange of practical experiences and knowledge amongst the participants, as well as to support the networking activities with the potential of developing further cooperation in the future. That is the reason why the organisers included into the programme also working groups in which the responsible staff of cities and municipalities tried to implement traffic calming measures, resolve intersections friendly to pedestrians and cyclists, improve the conditions for children while commuting to schools by bicycles, creating cycling routes between municipalities, or introducing parking facilities for bikes. “I assume it was outstanding that the representatives of cities and municipalities had the chance to improve the urban environment for its “users” – cyclists, pedestrians, families with children, all under the lead of experienced cycling experts. Transferring experience from places like Brno and Warsaw, which are close to us, will also help to kick-start cycling in Slovakia,” stated Daniel Duriš, the President of Cycling Coalition.

The Cyclurban project focuses on cycling as an element of the urban climate mitigation policy as a measure promoting sustainable urban mobility development. Apart from the above-mentioned partners implementing the project in Slovakia, partners from Germany, Estonia, Latvia, Poland, Croatia Greece also participate in the international project. The initiative is supported by the German Ministry of the Environment (BMU) through a financing instrument called the European Climate Initiative (EUKI).