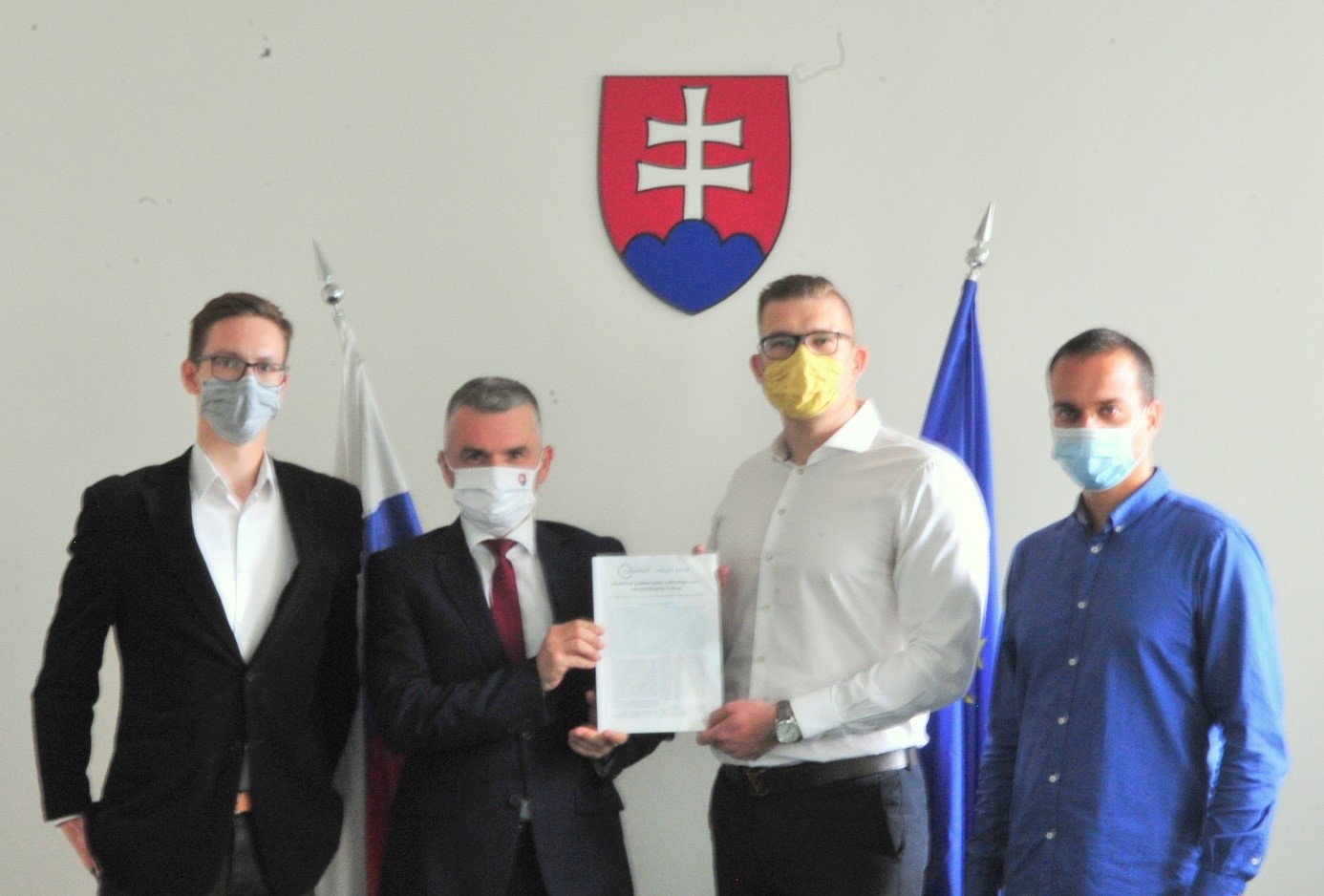 On June 3rd, 2020, ideas into energy together with Cyclokoalicia presented the results and recommendations based on the analysis and the feedback gathered from Slovak local and regional authorities at the Ministry of Transport (MDV SR). In March and April, more than a hundred self-governing regions, cities, towns, and city districts were answering questions related to their hands-on experience with funding of cycling infrastructure, capacities for developing sustainable mobility projects, and others. The aim of the survey developed by the project partners was to evaluate the functionality of the current funding system in Slovakia.

After a 30-minute presentation naming the key reasons why Slovakia is lagging behind in the field of cycling transport, a fruitful discussion with the mobility experts followed. At the end of the event, the representatives of the Cyclurban+ project solemnly handed in the first Policy Brief for Slovakia with the title ‘Let’s Substantially Support Cycling Transport – Do not Reinvent the Wheel’ to the Ministry of Transport’s State Secretary Jaroslav Kmeť. Also, the National Cycling Coordinator Peter Klučka and other leading employees of the Ministry of Transport participated at the meeting. Thanks to the very positive feedback from the decision-makers, further working meetings, and a policy shift following the elaborated recommendations are expected.

In addition, on 11th June 2020, a second presentation following the first successful one was organized on the premises of the office of the Deputy Prime Minister of the Slovak Republic for Investments and Informatisation. The Policy Brief was handed over to the Head of the Office Bureau Roman Krpelan at its end. The second meeting was a crucial step to improve the funding instruments of cycling infrastructure in the next programming periods. As of 1st July 2020, the Office is transforming to the new Ministry of Investment, Regional Development and Informatisation, which might be in their lead.

The problem Slovakia has been facing is the insufficient pace of bicycle transport growth in the long run.

One of the reasons why the national 10% target by 2020 (measured by the indicator share of bicycle traffic on the total transport work) was not met is an ineffective allocation of the financial instruments.

The results also show a lack of conceptuality of the existing schemes, which does not allow relevant municipalities to be well prepared for the calls. Simultaneously, the application requirements are disproportionately high discouraging local governments from the submission of project applications. Their evaluation process is perceived as non-transparent, which even more demotivates municipalities and self-governing regions from being active in this matter. To reverse this unsatisfactory situation, it seems inevitable to introduce transparent and measurable criteria for the project applications’ evaluation which corresponds to the declared national goal of cycling share. These criteria should be valid in the long-term and based on the principle of the highest added value. The introduction of separate financing schemes for the areas of bicycle transport and leisure cycling is highly recommended. Last but not least, the introduction of a two-round system for evaluating project applications needs to be thought over, too.

The first Slovak Policy Brief (written in Slovak) is available by clicking this link.