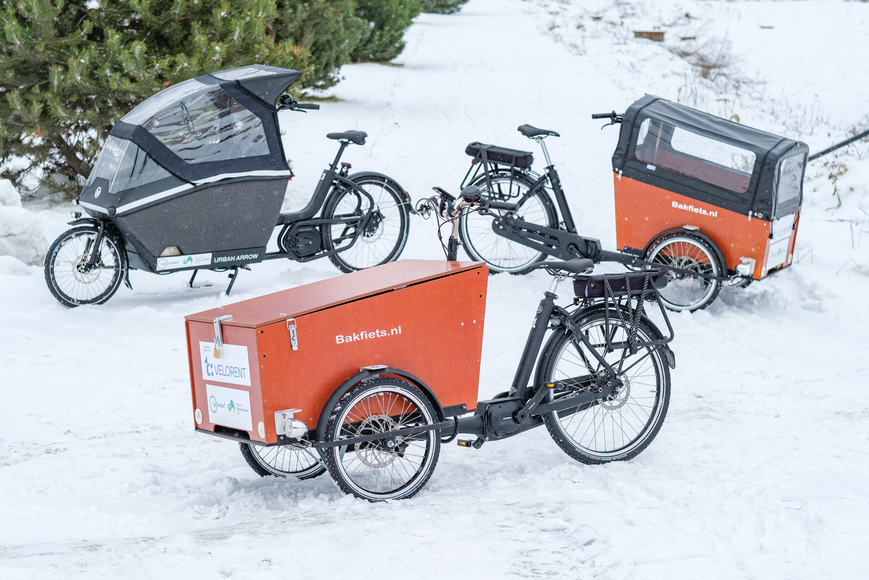 With support from the Cyclurban project, the Tartu City Government launched a Tartu bicycle rental pilot project (The Bicycle Library – Velorent), which offers private individuals and entrepreneurs the opportunity to try out the use of cargo bikes in their daily logistics and explore the interest of Tartu residents in the cargo bike lending service. The introductory event took place on Küüni Street, February 19th.

Tartu Bicycle Library is a rental of various bicycles, which introduces and offers both private individuals and entrepreneurs environmentally friendly mobility and logistics opportunities.

The lending of cargo bikes is organized together with Tartu Linnatransport, which has the necessary technical base and experience in organizing the Tartu bike-share system. In order to advise those interested, technicians from Tartu Linnatransport were on site.

The first cargo bikes come from the Netherlands, where there is a long tradition of using cargo bicycles. According to Tartu Deputy Mayor Raimond Tamm, cargo bikes are already very popular in many European countries, but in Estonia they are still relatively rarely seen in the cityscape. Tartu has set a goal to increase the share of environmentally friendly modes of transport in urban traffic. The number of year-round cyclists is rising more and more in Tartu and we have no reason to talk about the bicycle as a seasonal means of transport, added Tamm.

The cargo bikes of Velorent have been traveled on city streets since mid-January. Project manager Jaanus Tamm stated “We are happy to say that the interest of the people in cargo bikes has been very big and positive“. According to him the tricycle Bakfiets Trike bike has proved to be the most popular among lenders. “Reservations for this bike already extend until April, and in February and March the bike is already busy,“ explained Tamm. „The main purpose for lending is to transport smaller family members“. The second most popular is the two-wheeled Urban Arrow Family bicycle, which is also booked until April. The most modest interest of the people has been in the tricycle cargo bike.

If individuals or entrepreneurs are interested in participating in the pilot project and testing the use of the cargo bikes in their daily activities, please contact velorent@tartu.ee or tel. 736 1266.

During the pilot project, which will run until the end of the summer, feedback from cargo bike users is expected to jointly develop a user-friendly lending service. According to user feedback, it will be possible to increase the number and range of bicycles in the future. If there is a private sector interest in providing such a service in the future, it is very welcome.

The Bicycle Library – Velorent has been implemented within the framework of the Cyclurban+ project with the support of the European Climate Initiative (EUKI).